The RV lifestyle isn’t just for the nomads and the travelers. In fact, famous celebrities like Matthew McConaughey and John Mayer have been seen living the RV life in their own custom homes on wheels.

Whether they are a musician on tour, an actor who uses their RV at shooting locations, or just someone who simply loves to relax and travel, it’s no doubt that these celebrities know how to ride!

Ranging from $100,000 to $2.5 million+ for most luxury custom builds, these celebrities definitely travel in style. Some own classic RVs and trailers, while others have spent millions of dollars customizing their own luxury motorhomes.

It’s true, most of their RVs might be a bit more ravishing than some of us can dream, but big screen and big stage celebrities still enjoy the comforts of their home-on-wheels the same way any proud RV owner would. Let’s check out these 12 celebrities and their ravishing RVs.

12 Celebrities and Their Ravishing RVs

Let’s start this list off with actor Matthew McConaughey. While his down-to-earth RV isn’t decked out with state-of-the-art appliances and top-notch features, it’s still a Hollywood rig we’d love to take for a test drive.

Parked near the water in Malibu, McConaughey calls his custom 2004 Airstream International CCD 28 “The Canoe”, and mainly uses it for relaxing, making music, and working on his foundation “Just Keep Livin”. With a chill surfer vibe, a cozy couch and a decent sized kitchen, it’s no wonder why McConaughey admits to sleeping in “The Canoe” even if it’s only parked in his driveway. 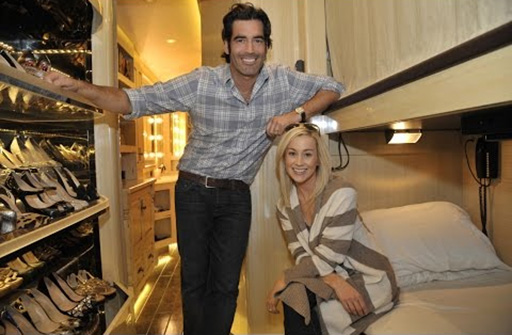 Boots and bling — country music star Kellie Pickler has the RV of every girl’s dream, and it’s a shoe lover’s paradise.

Pickler customized her very own luxury home-on-wheels following her spotlight on American Idol. After growing up in a trailer, Pickler now has a perfect RV that suits her every need.

Her cottage getaway-themed RV is equipped with an insane shoe rack for all of her high heels, a room that doubles as a mini spa, a built-in kennel for her three dogs, and more! 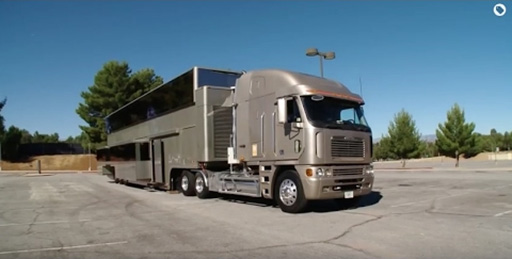 Technically not an RV, but a home-on-wheels we can’t pass up. Actor Will Smith’s motorhome is a 30-ton trailer designed by Anderson Mobile Estates, and at $2.5 million it certainly does bring on “The Heat” (the trailer’s nickname).

Smith lives in The Heat while on set filming for movies. The massive 1,200 square foot 2-story trailer is built with a full kitchen and dining room, a makeup area, a steam shower, a screening room and more! Let’s not forget about the 14 flat screen TVs either.

Fun Fact: Often referred to as a “mobile estate”, the trailer is so large that it has to be towed by a semi! 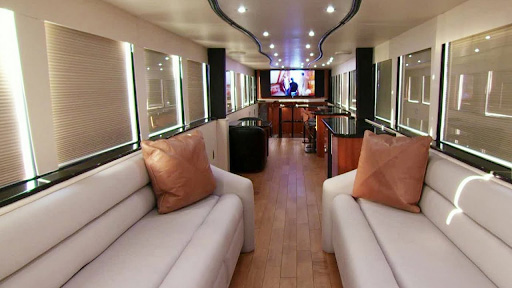 Giving Smith a (close) run for his money, TV personality Simon Cowell has a home-on-wheels that was also manufactured by Anderson Mobile Estates and is valued at over $2 million.

The 2-story RV doubles in size at the push of a button. It has two bedrooms and bathrooms, and a makeup counter with a pop-up screen to connect to his physician!

At 1,200 square feet, his RV has a clean and contemporary style with open spaces and large comfy couches, including a master bathroom with a freestanding tub, and more!

Fun Fact: Simon Cowell borrowed Will Smith’s “The Heat” before custom-building his own “Producer’s Pad”. 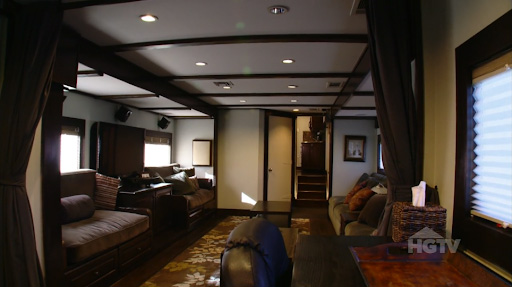 There’s more to Vin Diesel than being fast and furious. Valued at $1.1 million, his 2-story model from Anderson Mobile Estates is quite literally his home-on-wheels. In fact, he even spent the big bucks and had it shipped to Puerto Rico when he was filming Fast Five.

Fun Fact: It takes eight pistons and eight tons of pressure just to push the roof up on his rig! It also has a sunroof that goes from clear to opaque and everything in between right at the touch of a button. 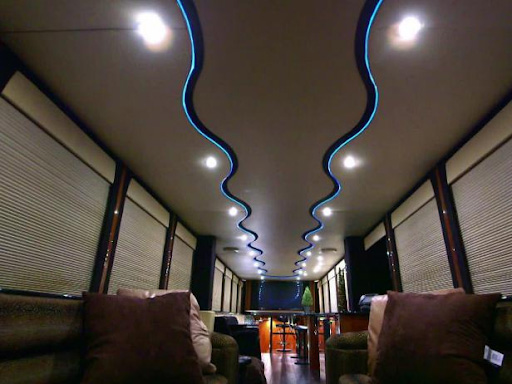 Best known for his role in “Dumb Dumber” alongside Jim Carrey, we’re happy to add actor and avid RVer Jeff Daniels to this list. In fact, Daniels even has his own YouTube channel featuring webisodes that show how he maintains his Gulf Stream Tour Master as he drives around Michigan’s Upper Peninsula.

Fun Fact: Daniels also starred in the movie RV alongside Robin Williams in 2006. 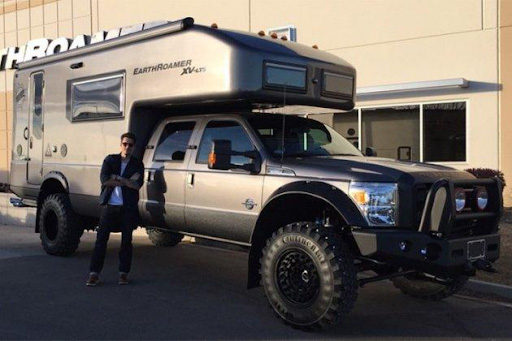 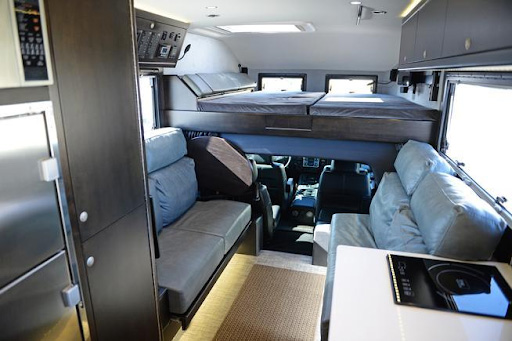 Singer-songwriter John Mayer might top the list for most unique RV. His truck camper is a beast, to say the least. Equipped with a power stroke v8 engine, 300 horsepower, and more than 600 lbs of torque, his EarthRoamer XV-LTS can handle any type of terrain.

The Ford F-550 based home-on-wheels has an over cab bunk compartment, storage cabinets, a bathroom, and a kitchenette. And at more than 26 feet long, it can also seat up to eight people!

Man, would we love to go off-roading with Mayer in that thing! 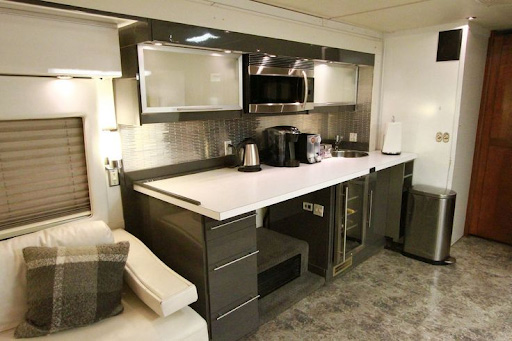 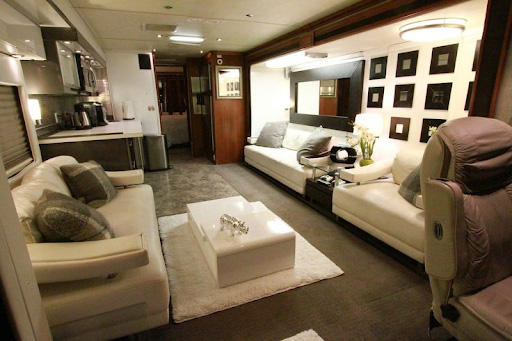 While most of us know her as the lead vocalist of the band No Doubt, singer-songwriter, and clothing designer Gwen Stefani has a decked out RV interior that showcases her design skills.

The trailer has marble flooring and countertops, large cozy couches, an adjustable sleep number bed, and even a wine chiller! With a black, white and metallic-gray color scheme, it’s chic and sophisticated.

Actor Robert De Niro felt right at home in Meet The Fockers, where his character drives a high-tech Fleetwood Pace Arrow to meet his son-in-law’s parents.

“Airline travel being what it is these days – so unreliable. I’ll feel much more comfortable knowing I have my own Posturepedic bed; my own thermostat; my own lavatory facility,” his character states in the film.

And it’s not only De Niro’s character that loves RVing. De Niro has his own custom 2-story RV. At a whopping $2 million, his RV has over 10 plasma TVs and a screening room that can seat up to 30 people!

Fun Fact: While De Niro’s RV was built specifically for filming on Hollywood sets like many celebrities, he hopes to ride around the country in a more suitable rig in the future. 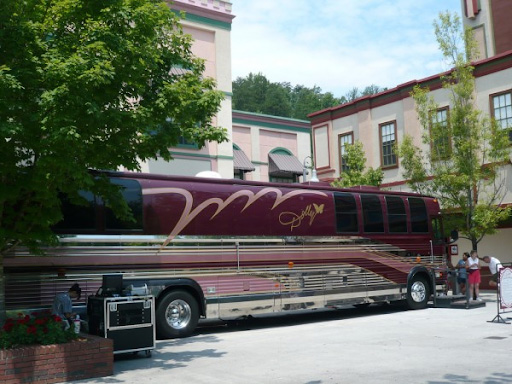 Entertainer Dolly Parton and her husband love traveling around in their little RV. But believe it or not, Dolly’s love for RVs began back in the 1960s when old buses were converted into RVs.

Dolly has an old retired tour bus called “The Gypsy Wagon” on display as one of the attractions of Dollywood in Pigeon Forge Tennessee that has over 600,000 miles on it. The bus was custom built in 1994 by Prevost Car Inc. at a price of $750,000.

The outside of the luxury RV is autographed by Dolly Parton herself and includes tons of makeup, wigs, and naturally, sparkly outfits.

Fun Fact: The entire Backwoods Barbie album was recorded in “The Gypsy Wagon”. 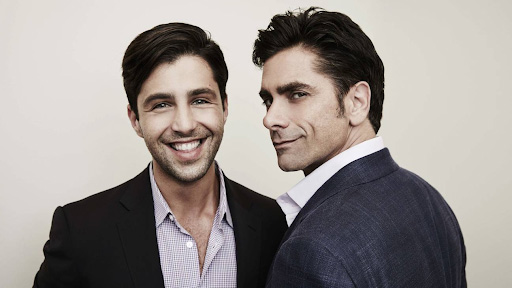 He might not be an RV guru, but actor John Stamos celebrated his 53rd birthday the way any of us would — on an RV road trip!

Stamos rented an RV and took a “bromantic” California road trip with Drake & Josh actor, Josh Peck. They even shared memories of their trip using #RVLife.

You see, RVs aren’t just used as an inexpensive way to go on vacation. With the rise in luxury motorhomes and tremendous trailers, RVs are loved by people of every income and every profession.

While you may not be able to customize an RV like Will Smith or Simon Cowell, there are still plenty of ways to buy a rig that will fit all of your needs and have the added luxuries and features you are looking for. Check out our RV buying guide and our definitive guide to motorcycle, RV, and ATV loans for guidance on financing. Don’t forget to make sure your RV expenses are covered! When you’re ready to hit the road, here’s a guide to the 10 best RV parks in America.

Looking for an RV of your own? Be sure to check us out at gorollick.com.

How to De-Winterize a Camper | GoRollick

How to Winterize a Camper RV | GoRollick

How to Get a Motorcycle License in Florida Apr 14th, 2022

Get access to exclusive deals, updates on manufacturer rebates, and product reviews and test drives