Just like Fast & Furious makes car lovers crazy, action movies make our hearts skip a beat whenever a motorcycle zips across the screen. On-screen motorcycle icons, Rambo (Sylvester Stallone) from First Blood and Maverick (Tom Cruise) from Top Gun rode two of the most badass bikes to ever hit film. From dodging gunfire and jumping railroad tracks, to racing fighter jets and speeding around base, let’s take a closer look at these characters and their bikes, shall we?

First Blood is a dramatic action/adventure movie starring Sylvester Stallone as the reckless, PTSD suffering Vietnam vet, John Rambo. In the film, Rambo dodges gunfire, weaves in and out of traffic, avoids pedestrians and Sheriff Teasle (Brian Dennehy), AND he jumps railroad tracks and hits rocky trails for almost three full minutes on his bike. Even if you aren’t a biker, you could tell Rambo had some serious skills that he clearly wasn’t afraid to show off (hell, who wouldn’t if we could ride like that). What’s better than a police chase? A police chase on a motorcycle, duh!

Rambo’s bike? A first generation 1982 Yamaha XT250 dual-sport motorcycle. Built to withstand practically anything, as you can see in the movie, Rambo puts it to the test, weaving around obstacles and easily taking the bike both on and off-road. The first generation XT (“Cross Trail”) 250’s were manufactured from 1980 to 1983 and have since made the little thumper a staple of back road riding. They had a 249cc single-cylinder 4-stroke engine with a 5-speed transmission, and with a horsepower rating of 22hp, the bike was able to reach a top speed of 75 mph (Wikipedia). 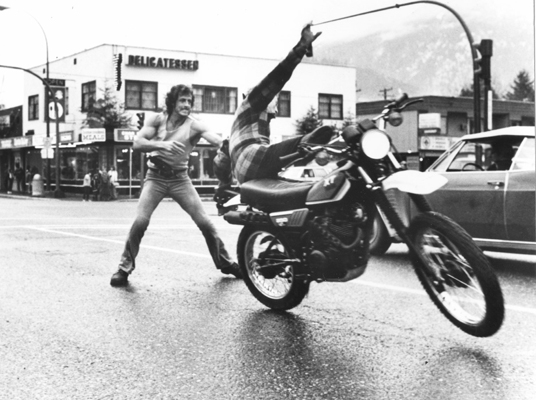 Dual-sport or dual purpose motorcycles have a standard riding position (shoulders over hips), a higher ground clearance, and on/off road tires. Dual-sport bikes of this time period were usually single-cylinder motorcycles with a smaller displacement engine (typically 650cc or less).

Second (1984-1990) and third (2008-present) generation models of the XT250 were also manufactured by Yamaha. The latest can only reach a top speed of 76 mph. While the top speed hasn’t improved much, the nimble and lovable character of this classic thumper has always withstood the tests of time. Nonetheless, the XT250 is a great dual-sport bike for both on and off-roading.

If you were growing up in the ‘80s, chances are you also saw Top Gun and immediately idolized Pete “Maverick” Mitchell, a reckless and dangerous US Naval Aviator. Not only did he have a bike and a plane, but he also had an awesome girl and some serious skills. He was the definition of cool. I mean, zooming around a US airbase as fighter planes take off? In awesome aviator sunglasses? How badass!

Now let’s take a look at Maverick’s bike, a 1985 Kawasaki GPZ900R (also called Kawasaki Ninja 900), the earliest sportbike to join the Kawasaki brand. The bike quickly became a cultural icon and Kawi’s flagship model after the release of the film, and for obvious reasons. Other than an envied young Tom Cruise riding the GPZ900R, this bike came with nearly all the bells, whistles, and technical advances of its time.

The bike was developed in secret over six years, and was Kawasaki’s (and the world’s) first 16-valve liquid-cooled inline 4-cylinder motorcycle engine, which put them light years ahead of other rival manufacturers. In addition to the 908cc 4-cylinder 4-stroke engine, the bike also had a 6-speed transmission, and with a horsepower rating of 115bhp, it was able to reach an incredible top speed of 151 mph (Wikipedia). 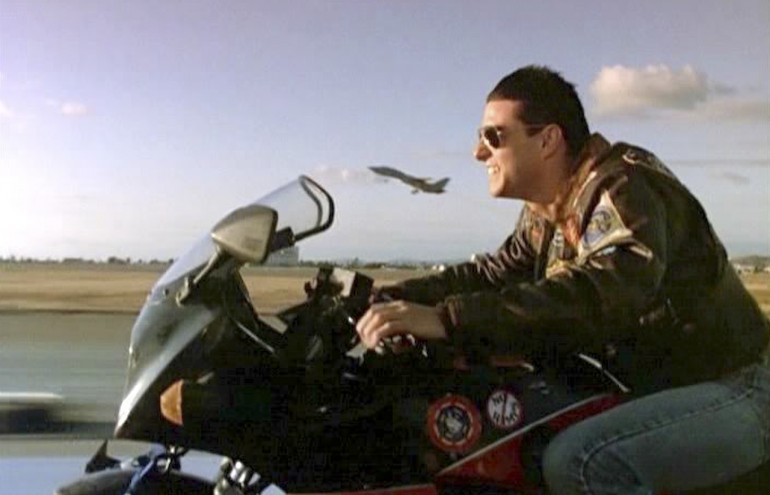 At the end of the film, (*SPOILER ALERT*) Maverick even took his bike for an epic race against F-14 fighter jets. And rightfully so, as the bike can reach a top speed of 151 mph, which gave it the title of the fastest production bike at the time.

Need affordable motorcycle insurance? Get a quote from Dairyland >>

One thing about these iconic movie motorcycles, is that in some cases, it’s the rider who makes the bike, and in others, it’s the bike that makes the rider. Not only are young Stallone and Cruise badass and dreamy on awesome bikes in these films, but they also showcase their incredible riding skills during their crazy bike stunts. In fact, Cruise does all of his stunts himself, while Stallone actually had stuntman Buddy Joe Hooker to do all the leaps and jumps for him.

Next time you want to see some serious bike cool, look for inspiration in your inner Rambo and Maverick, and check out the 10 most famous celebrities who ride motorcycles. Cruise makes the list and although he played Maverick, a skilled pilot and motorcyclist, he is quite the motorcycle enthusiast himself, as he’s both owned and ridden bikes worth thousands.

How to Get a Motorcycle License in Florida

How to Get a Motorcycle License in California | GoRollick

Get access to exclusive deals,
reviews and test drives, and updates on manufacturer rebates.

How to Get a Motorcycle License in Florida Apr 14th, 2022

Get access to exclusive deals, updates on manufacturer rebates, and product reviews and test drives